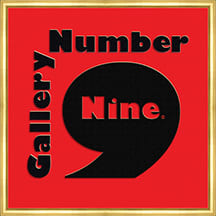 Gallery Number Nine video interview with New York artist, Julius Valiunas talking about
the Realities of Climate Change and the art he created to express the severity of this global situation.

the text of this interview for those who prefer reading...

"On earth day, April 22,1970, I borrowed a gas mask from my neighbor, kinda snuck into his garage. Wore it all day long. A full gas mask, with vinyl rubber head, triangular glass eyes and two rather large canisters to protect from pollution. We were protesting mostly air pollution. I was in high school in New Rochelle, New York  which actually was the first strike of COVID in NY state. My neighborhood got on front page of NY Post. That’s way into the future, well acutally in recent past, but in relationship to 1970, way in the future.

The crisis at that time (1970) was somewhat prescient but not understood that we were raising the temperature on earth, we were gonna make it hell on earth. We had an inkling of something wrong and wanted to stop it.

So, we’ve come up with a new phrase, something generated into a more common language, Climate Change. I find it somewhat not appropriate because is symbolizes like, oh, a change of color, or atmosphere, something you can adapt to, but acctually we can’t. We’re already in some incredible extinction right now that this planet has experienced on certain millenia of time, but meanwhile, speaking of temperature…"

"The Bill Mckibbens review of Mark Lynas’ book, “Our Final Warning: Six Degrees of Climate Emergency” (in The New York Review of Books August 20th Edition, Cover illustration by Anders Nilsen)… which just came out. Look at all this climate stuff, look at this illustration, just by art, one would wear colored glasses to deny the actual reality, and you see the reality of skulls, pots of fire, oil drums floating in water… what else?"

Can you tell us about Fire Road, your climate change/reality art?

"Yes, regarding the fires that have been engulfing the west, I’ve travelled there for the past 10 years. I live in the east coast now, here in Narrowsburg NY with the wonderful Delaware River in the background. I was thinking about moving out west for my latter part of my life, last phase of life on the planet. My friends and  my brother live out west. I thought it would be a good place to settle, rest my bones … but in all my travels there…things were burning, the planet’s burning, especially there. Constantly.

You’re flying and seeing pyrocummulus clouds our of your cabin window as you fly through Wyoming, Colorado all the way out to California..
Then driving from LA up through Seattle Washington… seems like every 60 - 100 miles there was another pyrocumulous cloud coming from some forest fire.

"Right now (August 22, 2020), just under 400 forest fires in California alone! 400 started by dry lightening, thunderstorms with no rain. We havent’ even reached Santa Ana winds season yet…which is not until the end of summer.
Can you talk a bit about your painting process, your art, Fire Road…

Well, Reality can be terrifying and Art can be redeeming, so it’s a way of trying to ameliorate, also making one aware, and can be done through visual art , writing, words, poetry, music, which can derive from reality and transform it into awareness of beauty or terrible beauty as one poet referred to it.

A Horrible Beauty, sort of like in this issue… Bill McKibben doesn't refer to beauty at all, except through rose colored glasses.

Oh we see the beautiful nature, look its all green, not on fire, but the Amazon is on fire. Its burning right now because its the winter season, the dry season. Who would have every thought a rain forest is on fire. Talk about oxymoron, a rain forest on fire. Can’t imagine that.

But it is. It’s burning up because its man made. Man has created it, allowed this to happen. And not only allowing it, but not stopping it. Actually making it worse."

Links that may be of interest:

Science Behind: What Are Pyrocumulus Clouds?
https://youtu.be/tHY8_NkYs9c

Happy Mother's Day!
Finding joy in the little things that occur in our daily lives can make a huge difference in how we manage in this crazy time on planet earth!
Have you ever hugged a tree or marveled at the gorgeous twinkling moonlight on newly fallen snow?
2022 Art Calendar Survey
Summer Garden Rewards and Challenges...
Sun Kissed Red Berries in Jane's Garden
Artists day off...
Transitions... art as therapy?
Snow Magic Continues
Prancing Through The Snow...

The presence of this badge signifies that this business has officially registered with the Art Storefronts Organization and has an established track record of selling art.

It also means that buyers can trust that they are buying from a legitimate business. Art sellers that conduct fraudulent activity or that receive numerous complaints from buyers will have this badge revoked. If you would like to file a complaint about this seller, please do so here.

The Art Storefronts Organization has verified that this business has provided a returns & exchanges policy for all art purchases.

Returns are accepted if you notify us within 3 days of receiving the art and, only if the art is in its original condition. We will issue a refund minus the insurance and shipping costs. If the art is damaged in any way, we need to file an insurance claim and will need to have the art returned to us within 7 days. If the art is not damaged but you would prefer a different print or artwork, please contact Debra to discuss your preferences. You are responsible for return shipping and insurance on art that you want to exchange.

This website provides a secure checkout with SSL encryption.

The Art Storefronts Organization has verified that this Art Seller has published information about the archival materials used to create their products in an effort to provide transparency to buyers.

Our fine art prints are created with archival inks on your choice of mediums: papers, canvas, metal, etc.

To be included in all of our special member's only art giveaways...
and to be among the first to see our newest art
ENTER YOUR EMAIL BELOW

Your cart is currently empty.

This is only visible to you because you are logged in and are authorized to manage this website. This message is not visible to other website visitors.

The above preview shows how to use the live preview on this website.

This means you can use the camera on your phone or tablet and superimpose any piece of art onto a wall inside of your home or business.

To use this feature, Just look for the "Live Preview AR" button when viewing any piece of art on this website!

Below, select which favorite lists you would like to save this product into.

Enter your email below and we'll email you a 30% OFF Coupon right now!

This offer is valid for NEW CUSTOMERS only!
Please note: it can only be used for your first purchase and can not be combined with other discounts.
Also, it will expire within 3 days.